Odds update every 5 minutes | Back to Election Betting Odds

ElectionBettingOdds.com has tracked some 730 different candidate chances across dozens of races between 2016 and October 2022.

How accurate has this site been?

The following graph shows how closely the betting tracked reality. 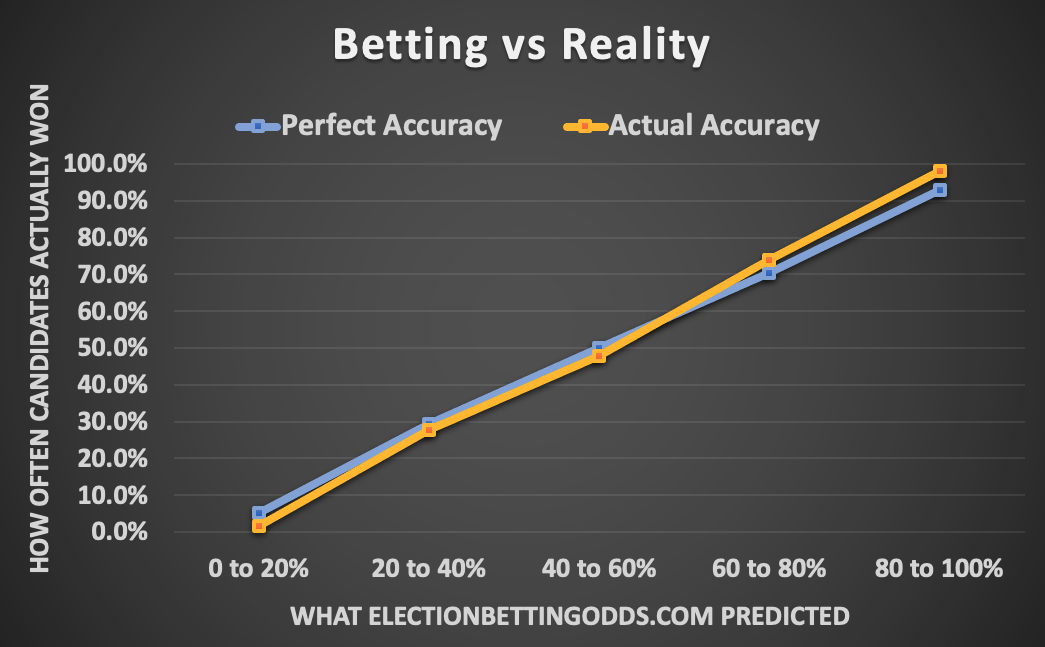 We can see that, using these prediction ranges spanning 20 percentage points, ElectionBettingOdds.com was extremely accurate. For example, out of all candidates who were given between a 20 and 40% chance of winning at 8am on election day, 27.6% of them actually won.

We do also see some systematic "underdog" bias at the edges. For example, for candidates in the 0% to 20% range, bettors gave an average prediction of a 5.2% chance. Yet, only 1.5% of those candidates actually ended up winning. The inverse occurs for highly-favored candidates, who should have been given even higher odds. This bias has been in part caused by regulatory trading limits on bettors at PredictIt, which prevents savvy traders on that market from making much money by correcting such odds.

The graph below holds predictions to a more precise standard -- 10% intervals, with smaller sample sizes. 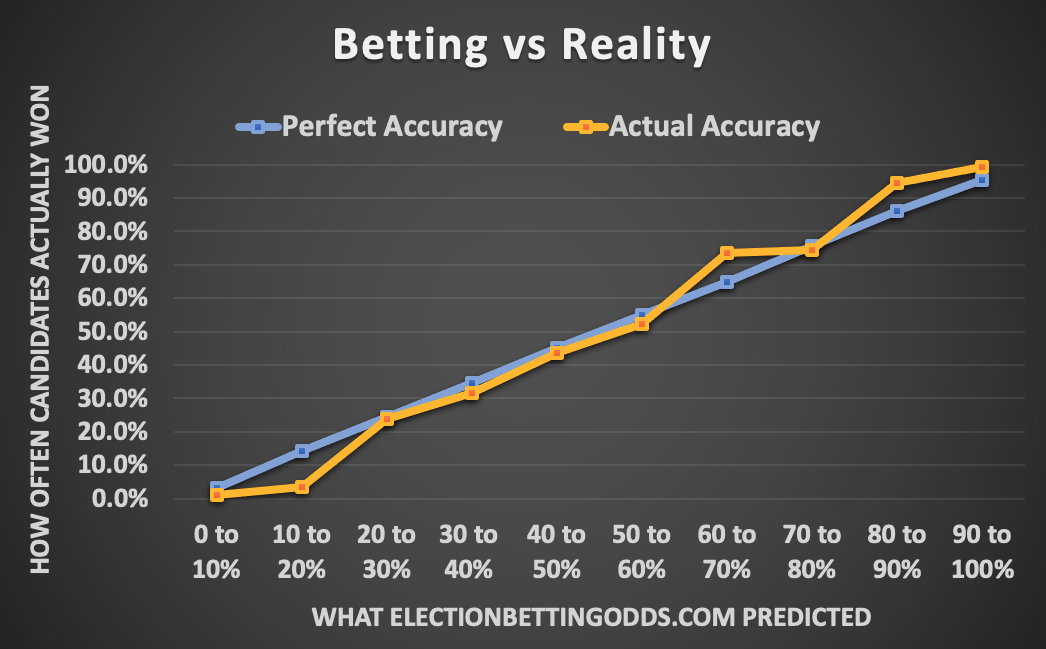 We can also see that the accuracy of the odds has been improving over time, as the number of races tracked has risen and reduced randomness. For comparison, here was the same graph after our 2018 update, where some 450 candidate chances had been tracked: How does all the above compare to other outlets? Looking at betting beats listening only to polls, according to several studies, such as this one in Public Opinion Quarterly. Also, a study by the author of Superforecasting got smart people to make predictions for study of their accuracy:

I managed to recruit 284 serious professionals, card-carrying experts whose livelihoods involved analyzing political and economic trends and events... Almost all had postgraduate training; half had PhDs...

the average expert was roughly as accurate as a dart-throwing chimpanzee.

Certain groups of pundits - namely ideological ones and those with frequent TV appearances - actually did worse than dart-throwing chimpanzees.

Note: This post has been updated with all elections tracked, up through October 2022. To see the old graphs with only data going up to 2018, see here. For an even older page, with only 2016 data, see here.

To come: an analysis looking at more predictions made by the site over time (say, a week before an election, or a month) -- as opposed to data used in the above graph, which just looks at a single prediction for each candidate, taken on the morning of the election.

As an aside, here were the biggest upsets we've tracked (which is unchanged since the 2018 update.) The following candidates were big underdogs in the betting. All won:

Below is ElectionBettingOdds.com's full track record, sorted from lowest to highest. Send any questions or comments to Maxim Lott at maxim.lott@gmail.com or at @maximlott on Twitter. The graphs above are based on these data.

Back to Election Betting Odds